What are amalgam fillings?

We are often asked about the safety of still having, and the removal of, old amalgam fillings as they do contain mercury which is known to be very toxic. At times, we are even requested by oncologists to remove existing old amalgam fillings in the management of cancer patients.

The principal reason we advocate the removal of amalgam fillings is the damage they do to the teeth in terms of cracks and fractures. We also acknowledge that there may be health reasons to remove them.

Most people who have these old-technology fillings had them placed in their childhood or teens. The amalgam fillings tend to last quite well without doing much damage, up until the teeth start to lose their youthful resilience and become progressively more brittle.

This age varies, but it generally begins in your mid-thirties. After this point, having old amalgams fillings frequently result in cracks and fractures of your teeth. It has been our experience over the last 35 years of close observation through high powered magnification, that we need to do more crowns on teeth as a result of amalgam-related cracks and fractures than all other reasons put together.

Why do amalgams crack teeth?

There are three main reasons why amalgam fillings crack teeth:

By the time you reach mid-life and later, your risks of tooth damage are increasing.

Mercury vapour from these fillings is emitted through everyday use. We take this very seriously, not only for your sake but for ourselves. We have measures in place to prevent you swallowing the amalgam shavings, and from breathing in the aerosol created.

Some practices like to use a rubber dam to remove amalgam. This does not prevent you breathing the aerosol which is the bigger issue compared to the few shavings left in drilling them out. The shavings are not effectively contained by the use of a rubber dam as the seal around these is never adequate to prevent any dust and shavings leaking under the rubber dam where we cannot see it to remove it.

A very competent dental nurse with a high-volume suction evacuation device is far better at removing all this dust and preventing you from swallowing it. This is because it’s very clearly visible in the floor of the mouth.

The aerosol created is the bigger issue. We have a unique solution to protect you (and us). The use of Klean Air Hepa air filtration system (pictured) functions like a giant vacuum cleaner. As we drill, the machine will suck in the aerosol from your mercury fillings to minimise the amount of vapour inhaled. 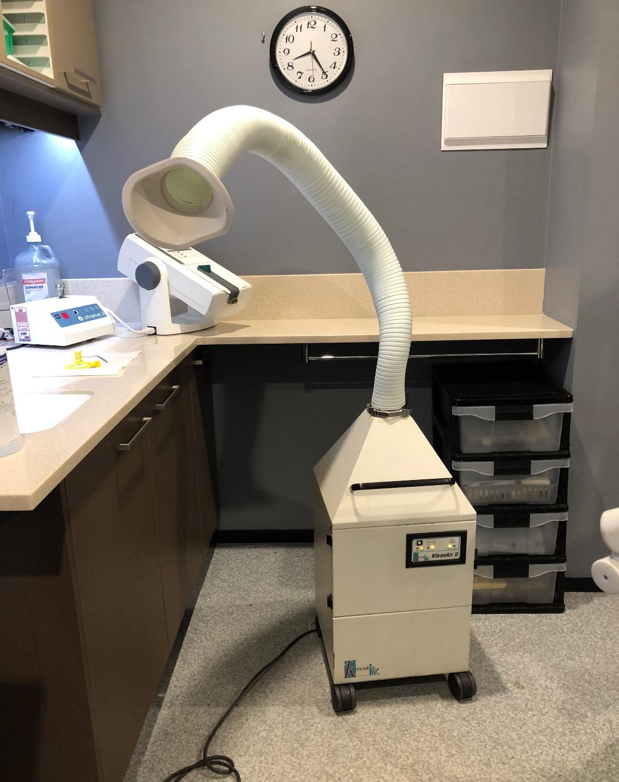 If you are worried about the process of having your amalgam fillings removed, we have a solution for you here at Future Dental.

Posted in: Latest News and Information

Future Dental would like to advise all of our valued clients and friends that we are taking a much needed break over Xmas. We hope you enjoy the festive season also, and please stay safe.
We look forward to seeing you all in the new year.
Our trading hours will be as follows:
Monday to Thursday 8am-5pm as per normal until:
Thursday 24/12/20 – Sunday 3/1/21 inclusive
Re-opening on Monday 4/1/21
Merry Christmas and here's to a happier 2021.
Best wishes to all from Bob and the Future Dental team.
×

It is a requirement for all persons (including accompanying person/s) who enter Future Dental to scan the QR code and fill in a COVID screen.
×